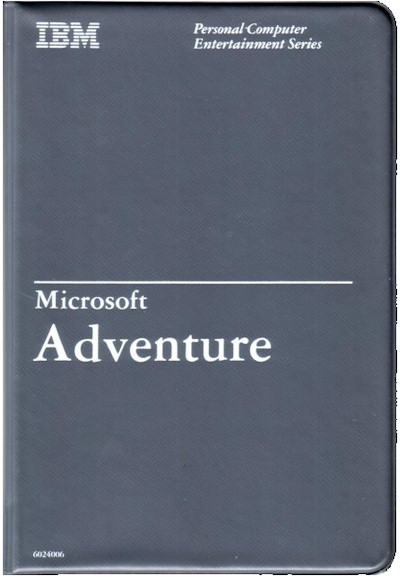 Colossal Cave Adventure (also known as ADVENT, Colossal Cave, or Adventure)gave its name to the computer adventure game genre. It was originally designed by Will Crowther, a programmer and caving enthusiast who based the layout on part of the Mammoth Cave system in Kentucky.

The version that is best known today was the result of a collaboration with Don Woods, a graduate student who discovered the game on a computer at Stanford University and made significant expansions and improvements, with Crowther's blessing. A big fan of Tolkien, he introduced additional fantasy elements, such as elves and a troll.

Many versions of Colossal Cave have been released, generally titled simply Adventure, or adding a tag of some sort to the original name (e.g. Adventure II, Adventure 550, Adventure4+, ...). Large value numeric tags denoted the maximum score a player can achieve after playing a perfect game. Hence, Crowther/Woods Adventure, the first with a point scoring system, is also synonymous with Adventure 350.

Microsoft released a version of Adventure in 1981 with its initial version of MS-DOS 1.0 as a launch title for the IBM PC, making it the first game available for the new computer. It was released on a single-sided 5¼ inch disk, required 32K RAM, and booted directly from the disk; it could not be opened from DOS. Microsoft's Adventure contained 130 rooms, 15 treasures, 40 useful objects and 12 problems to be solved. The progress of two games could be saved on a diskette.

PCem — the most authentic, very simple to use and configure.

MAME — (ibm5150 system) also very authentic, but a bit more difficult to set up if you've never used it before.

Reviewer: joarod - favorite - October 16, 2019
Subject: Does not work
Initializing... but does not initialize...
Reviewer: EricVLC - - October 21, 2016
Subject: Emulator doesn't works
I wait too much time for load.
Reviewer: Essayist - - May 17, 2015
Subject: Faulty Emulator.
Sadly the Emulator does not appear to work.
Reviewer: cirenos - favoritefavoritefavorite - May 2, 2015
Subject: Comment
Tried loading this page in several browsers
Does not complete
Reviewer: Tyler - - November 9, 2013
Subject: Fixed
there was an emulator issue at the time the other reviews were written, but it is now fixed. This should work fine now!
Reviewer: opielooking - favorite - November 5, 2013
Subject: I cannot run the program
I get a mini-shot of the Adventure screen at the left of the description; it's titled "download item". Moving the mouse over it doe not change the mouse pointer, and clicking on it has no results. There is no larger screen on the right I can click on. So far I've tried FireFox, IE10 and Google Chrome. No success.